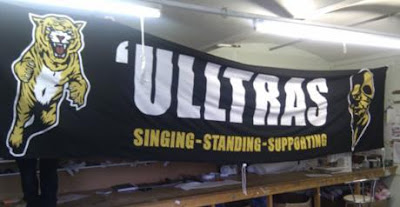 Nothing too complex.  Which is useful as one of the conditions of being an Ulltra is to be adopt a simple singular state of mind.  This is easy for us ‘Ull folk.

The other being to sing and stand at a football ground when supporting ‘Ull Citeh.

I went to two away games last year and both were thoroughly enjoyable events because of the singing, standing and laughing at the ridiculously drunken idiotic fellow fans, so I am very pleased to see this initiative.

Home games at the KC have a similar atmosphere to finance departments in offices.  With the stewarding gestapos ensuring nobody swears or stands up for more than 5 seconds.

Hence the backlash to create the Ulltras to improve the atmosphere.