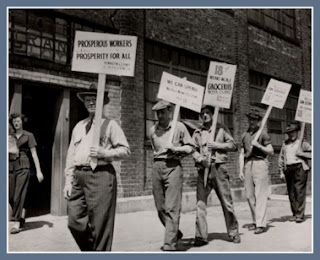 Unless you live under a rock, you’ll know that the UK economy is in difficulties, has a large debt (60% of gdp or 103.5% if you include future pension commitments and a few other things) and a deficit of about 13% of gdp, ie this is what we are adding to our debt every year.

Note only Iceland and Greece have a larger budget deficit in the world.

This is clearly unsustainable.

Everyone has to play a part in getting the country working again, and back to a sustainable footing – those of us in the private sector have had our wages held down and many have lost their jobs, or have given up a month’s wages or bonuses to keep their companies afloat in extreme difficulties, or worked extra hours.

Sadly the public sector trade union leaders and many of their members see themselves as exempt from having to contribute towards fixing the UK economy.

Many simply blame the banks as if it is their fault – when the banks contribute huge amounts to our economy, and the very large wages that some people are paid are taxed very heavily.

I am going to try my hardest not to loath all of those on strike, like I do their trade union leaders who I dearly despise nearly as much as people like Robert Mugabe, after all, not everyone on strike will understand the financial situation of the UK and the potential future difficulties, and some probably don’t take any notice of what is going on and just get told by the union leaders that the nasty government is attacking them.

I am sure many of those on strike are probably just sticking up for what they believe in, which is exactly what I am doing now – the return of a well-run country with sound finances and a good future with a strong economy, good employment levels, low crime and more housing.  Not what we will have if we don’t fix our finances.

It is after all, an idealogical battle that the trade unions are trying to fight against the Conservative party, using their members as pawns.

In an ideal world, if this continues, I would like to see my government fight back.  Remember the coal miner’s strike?  What did we do?  Build nuclear plants.  No more need for coal.

Sadly I am not sure how to replace schools.  Though perhaps if a couple of hundred were shut down, especially in Labour areas, that could be quite amusing.

We could always sack the immigration officers and just let anyone in.  That seemed to be the policy of the Labour government, oh except they probably didn’t sack anyone, just told them to let everyone in (so they would get more votes, goes the slightly debatable theory, though it sounds good).

But maybe we actually need a solution.

I suggest setting some targets for public finances, such as a reduction of debt – in 1990 it was just 25% of GDP.  Perhaps if we get it back down to this level (for example), then we can offer an increase in the pension contributions made by the government.  And if the debt goes back above, say 40% of GDP, then this extra contribution is then stopped.

Therefore public sector workers would have a personal interest in a sensibly run economy.

One response to “My Solution To The Public Sector Strikes”