So finally I have had a holiday this year – unless you count trips to Manchester, Leeds, Hull or Canary Wharf – all of which were very good but not exactly counted as a holiday.

And it was to a country that I have taken an increasing liking to over the years – which considering the amount of hatred I had for the Germans during my formative years growing up in Hull, I feel is a good achievement.  If only the rest of the country would forgive them for the war – after all we beat them 5-1 a few years back.  And they gave us Sven Vath.

Stuttgart isn’t somewhere that I ever imagined I would visit – unlike Berlin and Frankfurt (Love Parade and Cocoon, of course!).  It has a unique kind of charm, in the same way that you could say Birmingham has a unique kind of charm.  And in many ways it reminded me of Birmingham – a mix of some old buildings, some new arty style ones and quite a hefty proportion of ugly buildings.

That and a ton of shops and about 500 Christmas market stalls – allegedly Europe’s largest.  But given that the holiday was free having won a competition on the internet – I felt obliged to go.

Of a little more interest to me was the nightlife, alas I had given up on persuading my sister to come and see two of minimal techno’s finest, Raresh and Troy Pierce, given her propensity for liking a form of music totally alien to mine (yes, indie…where did all those years of attempted musical education from me go, Kathryn?!  Actually I am sure you used to have a soft spot for Spice Girls so maybe I did achieve something!!!) I had to accept the randomness of the town nightlife – which the receptionist in the hotel assured us was just like Ocean Drive, in Miami.

Now I haven’t been to Miami, so I cannot comment on the accuracy of this claim.  However it did remind me of any strip of bars in most towns and cities in England, though with a greater propensity of house music and thankfully little in the way of chavs and pop music.  And when I say house music, I found a particularly dull version – though this is a big step up from the Annie-Mac style gash played in many English bars nowadays.

One highlight was, however, buying two drinks with €10 and getting €36 change.  Now it definitely was not a €50 note I handed over.  I did contemplate querying my change, but given my lack of German language skills, and the fact that Germany embarrassed us somewhat in the Corruption Cup in South Africa in the summer, I chose I accept it as a gift.  In exchange, so it seems, I gave them my shovel.  My most treasured of items.

We did find quite a cool bar which gave out the most amazing cake (more on the food in a minute) – though had possibly the most disgusting toilets known to man outside of India – and a smell to match.

The food in Germany is uncompromisingly excellent.  I think I managed 11 sausages over the weekend.  Some of which were half a metre long.

One thing which was a touch disturbing though, was a Bifi roll on the plane.  “A sausage-based snack”.  This was quite terrifyingly disturbing, and if I hadn’t been to Germany before this weekend, I would have assumed that I was about to enter a MacDonalds diet. 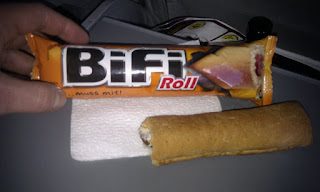 We did of course find an Irish pub, a C&A’s, froze in temperatures of about -6’C during the Friday – I also managed to fall on my arse in the ice when drunk.  I only saw one other person fall over which was this rather drunk and stoned guy in a bar we were attempting to talk to.

All in all, an excellent weekend and I thoroughly recommend a trip to Germany to anyone who hasn’t been, though perhaps not especially to Stuttgart – there are more interesting places in Germany to visit.