Oh, Maggie, thank you ever so much. 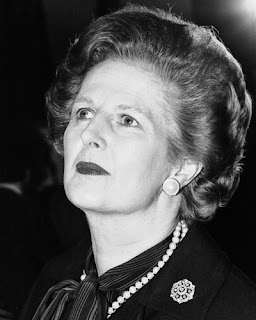 I have just read an interview with her, back in 1976, a full 3 years before she became Prime Minister.  It is a fascinating read, if you have the time.  She really was on the ball.  So many comparisons between then and now.

Just one quote for my blog, in reply to the interviewer’s question of “There are those nasty critics, of course, who suggest that you don’t really want to bring them [incumbent Labour government] down at the moment. Life is a bit too difficult in the country, and that … leave them to sort the mess out and then come in with the attack later … say next year”

“I would much prefer to bring them down as soon as possible. I think they’ve made the biggest financial mess that any government’s ever made in this country for a very long time, and Socialist governments traditionally do make a financial mess. They always run out of other people’s money. It’s quite a characteristic of them. They then start to nationalise everything, and people just do not like more and more nationalisation, and they’re now trying to control everything by other means. They’re progressively reducing the choice available to ordinary people.”

Anyway, that is my rant for now, Maggie remains an inspiration.

Individualism.  Perhaps I need a bit more of it in my life.

This weekend, I don’t have much in the way of plans, but I fully intend on basking in the very warm or perhaps hot sunshine of Sunday, down by the River Thames.  By myself quite possibly, either way I shall make it enjoyable.

And there is just a chance that we might get a thunderstorm come Monday night, into Tuesday, I do love a good storm.  There is more potential there than I have seen in years for something quite severe – but it is only potential for the UK, say 15% chance of it coming off.  It will most likely be France, Belgium & Netherlands that get to experience something quite special, albeit quite damaging too.

On the off-chance it comes our way, it should be one that everyone talks about for days, and many remember for years.  The potential is there but it is more hopecasting right now.  Maybe in a couple of summer’s time – it is getting closer each summer.

Back to individualism, I booked my coach journey from London to Leeds and back, for Cocoon In The Park.

I was initially disappointed when I realised that every single person that had previously said that they were up for going to Cocoon In The Park dropped out, but they need to have their adventures, and I need to have mine.  It is a long time since I have done something like this, I am almost breaking some of my own boundaries – kind of as if I am going travelling, but only for one day!

I’m actually quite excited about doing it on my own, and I will have nobody to look after or point in the right direction – I can be free and do exactly whatever I want to do.